The Rains of 7G Rainbow Colony

Rains and sunshine gift the sky with a spectrum of seven colours- the rainbow. Rainbows are formed by the reflection, refraction and dispersion of the sunrays through the droplets of rain. The rains in Selvaraghavan’s 2004 film 7 G rainbow colony embrace the rays of sun through its drops and result in a rainbow that is hued, haunting and heart breaking. The formation of the rainbow here surprisingly follows the same patterns of the natural phenomenon – initially occurs the reflection, then refraction and finally dispersion.

The tragic tale of love begins with the reflection of Kathir as he recollects his past . The name Kathir means the rays of sun. He reflects in the rain on the path of his love story with Anitha who isn’t merely the rainstorm of his life, she is the sky herself. The first time Kathir sees her ,it is against the backdrop of a clear blue sky as the mounting music conveys her angelic self .Accordingly, she is widely clad in blue and white in the film . In notable instances, she is orange and red with rage and green with disgust. She is the birthplace of rains, sunshine and the rainbow. In the first rain of the film, Kathir revisits her memories as he drives through the downpour.

Memories of her face, smile and times spent together flash as sudden lightning amid the rainfall. She is gone and the reminiscences are filled with pain. As a defense mechanism, individuals develop a tendency to repress such pain provoking recollections and elude being drenched and drained by them. The people in the street do the same – they escape the rain and seek shelter. Kathir rides through such a deserted road and rain, he embraces his drive. The onlookers seem surprised and their perplex is brilliantly committed by master Selvaraghavan as Yuvan exemplifies the soul of Kathir’s insanity. Remember, Kathir is the ray of sunshine and it is a path through the droplets of rain that will lead him to colours. Kathir walks into his office, wet and filled with the memories of Anitha which seeps into him and soaks his core.

The echoes of their relationship occupy him throughout the day and all that he is looking forward to is a reunion with his fantasized form of her fallen self. While Kathir heed no repression, he takes denial as his defense. He is incapable of denying her existence with him. A few years ago… 7/G is empty and so is Kathir ‘s life.

The first thing a few people tend to condemn early in the morning is the blazing heat of the sun which keeps going in its fixed direction of desire turning a deaf ear to these rants.

Kathir remains ignorant of such condemnations from his father and gets on per his will. The rays of sun are also filled with particles of dust and dirt in the air . These substances when refined and refracted through rain drops lead to many hues. Perversions and recklessness are the particles of dust in him which get bent as plentiful love and purpose power his potential. New tenants come to live in 7/G and a new force enters the life of Kathir. The monsoon begins.

With the second rain in the season, Kathir moves to refraction. In Physics, refraction essentially denotes a variation in the direction of a wave as it passes from one medium to another. It also includes the bending of light. Kathir moves towards this transformation gradually and the drizzle that begins it occurs in the rain which finds its place in Kan pesum Vaarthaigal.

Kathir starts moving from his medium to that of Anitha’s and is redeemed of his reckless ways. As he sings the bruises of his heart ,arrives the rain chasing the celebrating folks who want none of their festive costumes and happy make -over to be washed off in the rain but what mask does Kathir wear? None can stand his heat.

He lets the pain within escape as he dances in the rain. He is there back at Anitha’s place after she hits him with her footwear as he accidentally touches her inappropriately in an attempt to propose his love for her . The frequency of those who turn up in the face of such humiliation is almost zero. Kathir is the only one . He is sole one who also faces the rain. He doesn’t stop. He seeks pleasure and liberation in the rain as he grooves sans grace to Yuvan’s melody that mixes with a sense of melancholy and festivity, the same way he seeks the love and acceptance of Anitha despite her disgust for him and the lack of gentleness and sophistication in his approach .In this phase, the sunrays penetrate further into the droplets of rain. The place in which Anita holds Kathir in her heart furthers too and she lets it take course.The phenomenon lasts in the few following rains before dispersion occurs finally.

The subsequent rain pours as Kathir fights the goons sent by Kishore. The sky resists an invading interruption and the sunrays fight it as the baffled sky looks on. Post the fight, as the rain prolongs, Kathir enlightens Anitha on his love for her and what a waste her life would be if she marries Kishore. He even moves to seek her pardon.

He stands there in the rain talking to her as she listens on sporting an umbrella. She still is hesitant to accept him .The sky is no wet and heavy but is constantly witnessing the showers and its embraces of the sunrays. When Kathir later tells Anitha that she is afraid she might fall for him, the lady breaks out in laughter and reinforces her superiority. She is above him , she looks down on him as he looks up on her. Kathir’s rants of love that he feels alike flying high in the sky whenever she is in his vicinity provide delightful evidences of interpretations of Anitha as the sky. In her ,he flies ,faces the rains and sees the rainbows.

In the following rain, the refraction is complete when Anitha implores Kathir to complete his studies and establish a security for their future. Anitha tells Kathir to meet her in the terrace by 5.am and in the midst of their meeting begins the rain which wakes the sleeping boys who flee in an instant of the shower. This is the only rain in the film where Kathir doesn’t face the shower. He is shielded by Anitha and he bends. He initially struggles, suffocates and is firm that he is useless. Her push and confession of love aids him in the discovery of his own self. It guides him into the next phase. The father no longer complains ,the sun is calm and he remains grateful to the gracious guarding clouds.

The sky eventually comes crashing down on his head. The separated lovers elope for a night to the hill station – an elevation that is closer to the sky where clouds of mists fill the chill . The clouds come down to meet the raised ground in the hills and there Kathir makes love to Anitha. Poet Maya Angelou remarks , Be a rainbow in someone else’s cloud. Anitha tries being Kathir’s rainbow that night ,little did she know the colours will concentrate his life after her fall. 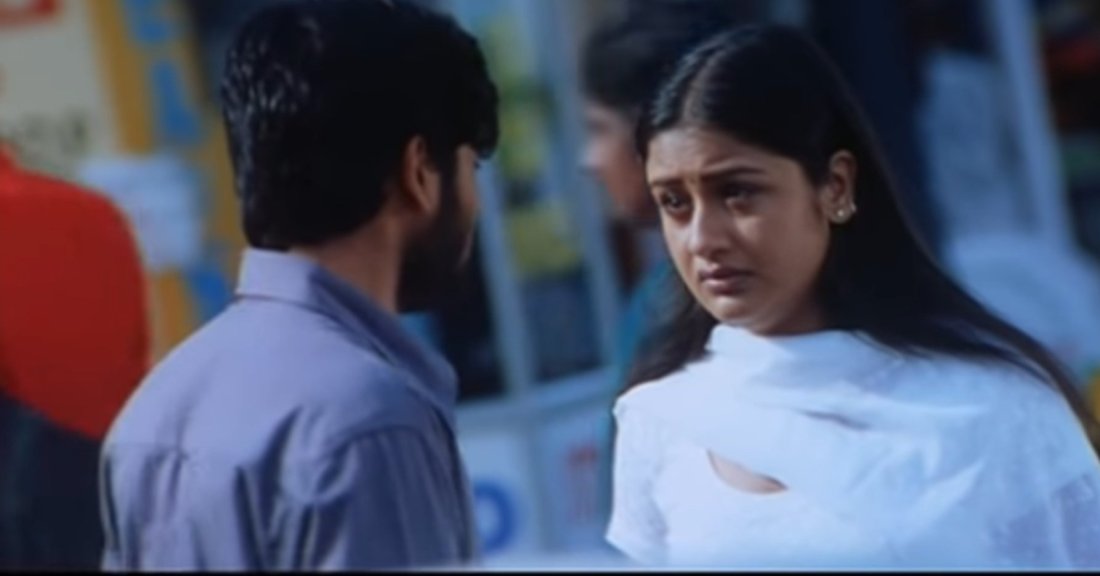 Extreme heat in the course of Summer that follows the days of monsoon own the might to trigger rains out of the blue. In consequence to the heat of friction between the couple, occurs the fall of the angel in a note that is unfortunate and unexpected.

Denial seeps into Kathir who is closer towards emerging out of the raindrops. The presence of Anitha dressed in pristine white fills his awareness. In his failed efforts to kill himself, Kathir is rescued by a group of Christian sisters who comfort him against the backdrop of the sky .

His divine, his Anitha, the Christ of his life is resurrected in his perception. He meets his revived form of her . She talks him out of suicide and they exchange words and kisses of love . Her angelic influence, divine love persists and dusts off the dirt in the rugged ray of sun. The sea and the sky meet behind them. The sun rises from that zone of meet which exists beyond our visibility and Kathir rises from the same horizon of sunrise which is afar our abilities of sight and perception from the shore.

The final rain wets Kathir as Anitha walks with her umbrella. Kathir’s pain and broken self is rinsed in the rain. The dispersion occurs as he moves away from sanity and towards the force of sanctity and love – Anitha. He is high above and is truly flying as she blends as one with him .From the dispersion emerges the rainbow of the many colours of love and painful memories.

The actual shape of a rainbow isn’t semi-circular but circular and the circle is visible only from greater heights. Kathir who is high above in the clouds sees it – vivid and clear while others catch only a glimpse of the half as they remain rested on the ground. In his flight from sanity ,he sees and confronts Anitha but the others can never and ever will. VIB G YOR are the seven colours that make up the rainbow. Note that G lies in the middle . The love story of Anitha and Kathir brutally ends in the midpoint before meeting a fascinating life of forever in the mortal locality of 7 G Rainbow Colony. Rains do stop abruptly as they begin. The closing frame moves from Kathir and his conversation with the part she leaves and extends high towards the beach street and the dark sky. The sun has set. Tears seep in ,the blue melody doesn’t comfort, it rips off the heart, furthers the wound as the heart heaves and Kathir heals.

The rains of 7 G and its rainbows will warm and break our hearts . I hear thunders announcing the next rain’s arrival and I present here the recollection of a poem that will promptly conclude this piece of admiration,

Rains and love, come with full force ,
Affect everything in the way ,
And leave,
Taking everything with it !

A romantic believer in the magic of movies and poetries, wishes to write for and about movies and is optimistic that the pursuits will behold the heart all through life. View all posts by Mirra